We read through each guideline thoroughly in order to compare it to each of the five levels in the FSSD. We used color coding post -it notes on a large sheet of paper to organize our results. Orange meant that it was a clear gap, yellow meant that we did not know if it was an issue or not in relation to sustainability, and green post-it notes were where the guidelines were compliant with sustainability. In the image it might be difficult to see but we divided the chart vertically by guideline and finally best parts and gaps highlighted, and vertically by the five FSSD levels.  It was clear from this that not a single guideline had fully encompassed each level, meaning that not one of them was using a full sustainability scope or being strategic as strongly as they could potentially be, as defined by the FSSD standard. This group work led to a brainstorm on the different themes that were represented in the guidelines repetitively. The brainstorm of themes helped us to construct our interview questions and go deeper into research in those areas. 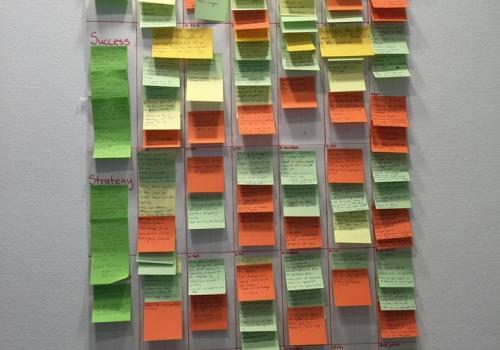