The first part of this stage is to determine the location of the caves. On the map we can see the location of the most important caves for conservation in the quarry area. The second part represents the investigation of the caves from a conservative point of view. All the caves are important as hybernation and maternity caves for bats and cave number P04 is also important for big mammals conservation as it is used by a Lynx lynx individual as a shelter. Next steps are linked to the manner in which the animals use the quarry area. We have monitor the bat species presence in the quarry during the feeding time and we have found several species that are using the quarry as a feeding ground (Myotis myotis, Rhinolophus ferrumequinum , Rhinolophus hipposideros, etc.) We found a animal passage through the quarry , as showed on the map, and around it, which shows that the fauna is using the quarry area. We found wolf (Canis lupus), bobcat (Lynx lynx), red deer (Cervus elaphus), roe deer (Capreolus capreolus), red fox (Vulpes vulpes), European pine marten (Martes martes), beech marten (Martes foina),badger (Meles meles) red squirrel (Sciurus vulgaris) wild boar (Sus scrofa). We have also mounted a camera trap on the road between the quarry and the forest and we caught on tape some movement as we show in the video. As a conclusion we mention that the mammal fauna from this area is using the quarry surface as a feeding and sheltering habitat. 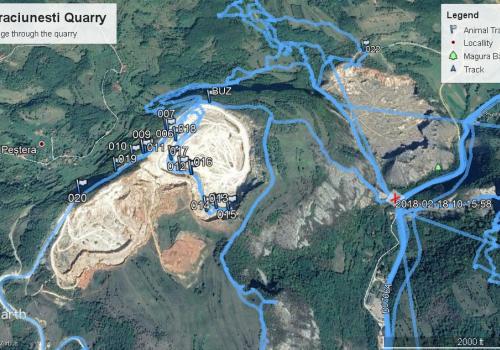 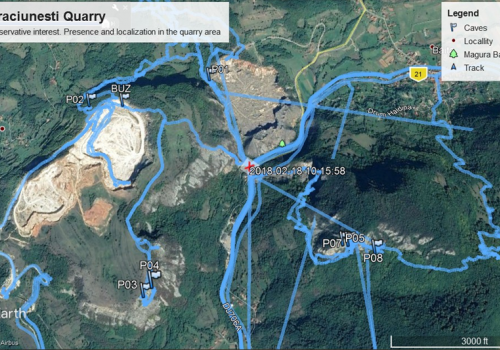 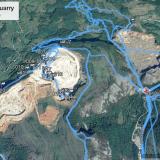 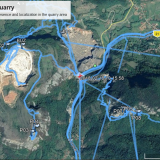